Colorful Birds on the South Shore of Lake Apopka

November 30, 2019 - A female Snail Kite flew overhead on her search for her breakfast.... Read more 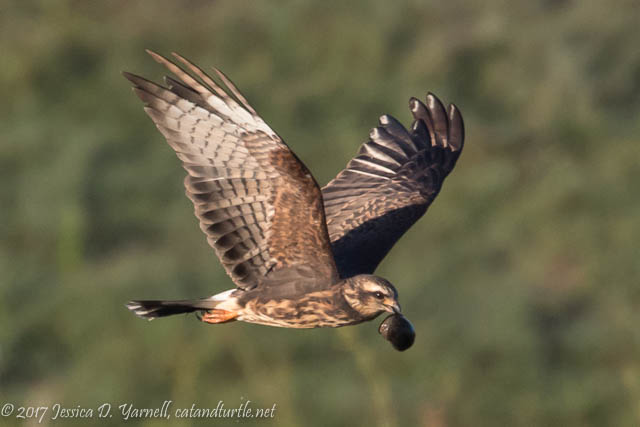 Will Fly For Food: Snail Kites in Apple Snail Paradise!

Home > Beyond the Backyard > Other Places > Will Fly For Food: Snail Kites in Apple Snail Paradise!

February 15, 2017 -  Two types of birds love apple snails, Limpkins and Snail Kites.... Yep, that's a female Snail Kite....  Snail kites are endangered in the US and in Florida, and I've had limited opportunities to observe and photograph them, so my trigger finger went a little crazy!... Read more January 12, 2015 - The birdie celebrities at the wetlands right now are the Snail Kites, who are fairly new residents....  During the Christmas Bird Count we counted 5 different Snail Kites, and yesterday we saw at least 3.... Read more December 21, 2014 - My favorite photo op of the day was with the Snail Kites, who are new to the Lakeland count this year....  As the exotic apple snail becomes more widespread, the range of the Snail Kite is expanding as well....  We were thrilled to find FIVE Snail Kites all perched together in…... Read more August 17, 2013 - Michael told me that a Snail Kite had been seen recently at Orlando Wetlands, so we headed off to find her....  While we stood watching the Snail Kite, Black-Bellied Whistling Ducks flew all around us, and the air was full of their sweet happy calls.... Read more More on the Snail Kite

October 25, 2012 - I received information today about the banded Snail Kite that is hanging out at the Circle B Bar Reserve lately.... Read more The Snail Kite at the Circle B Bar Reserve

October 19, 2012 - The Circle B Snail Kite is banded, and I was pleased to get a decent shot of the band numbers on Saturday.... Band close-up The Snail Kite is such a beautiful bird.... Read more October 12, 2012 - As I walked out, I thought about the recent posting about a Snail Kite sighting in the area.... Then as I turned to leave, there was the Snail Kite sitting not too far from the trail.... Read more